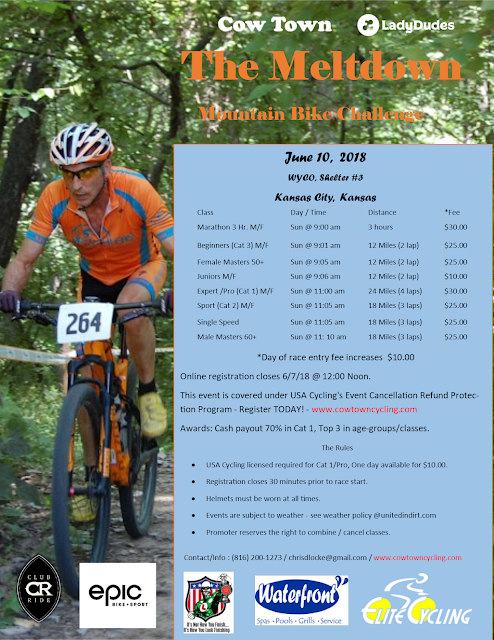 Posted by dirtdobber at 7:08 PM No comments: 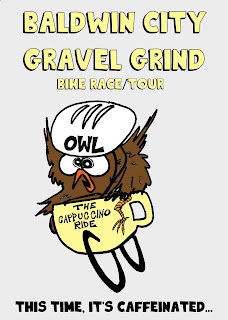 My good friend Gerard is helping Baldwin City put on a fundraiser.  Come on out this Saturday for the fun. More info http://gravelgrinders.blogspot.com

Register today: https://baldwincity.recdesk.com/Community/Program  Cost is only $30.00

35 or 70 mile routes on beautiful gravel roads surrounding the Baldwin City area that connect famous historical points. There will also be a 12 mile beginners route. Bikers will begin in downtown Baldwin City.


Posted by dirtdobber at 7:17 AM No comments:

Sunday's race is a GO.  See you out at the River Trails. 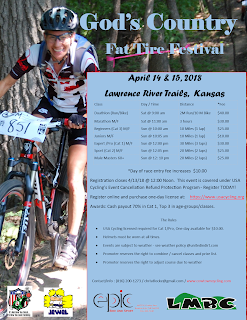 Posted by dirtdobber at 2:54 PM No comments: 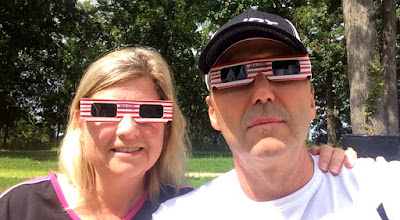 I have not been keeping up with current news lately.   Carolynn tells me this morning that we are heading up to Smithville, MO to watch this big event - The 2017  Total Solar Eclipse.  We even have glasses.   Luckily we did not have to drive far because it turned out be a sort of a bust to begin with. 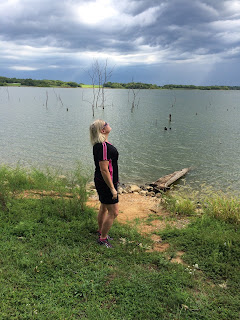 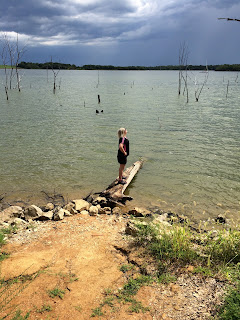 Carolynn tries to see the eclipse as it starts. Lots of clouds in the sky but you can still see it at times. 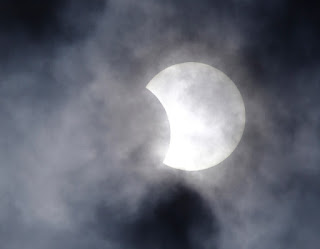 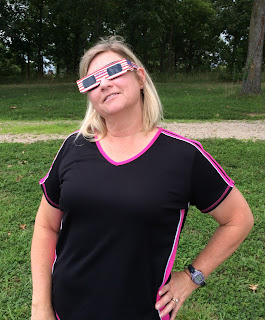 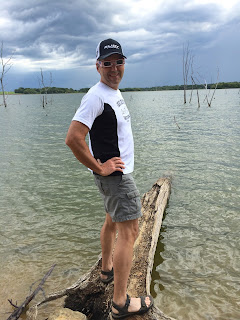 Here we are sporting our $2.00 glasses.  Hopefully these things will protect our eyes. 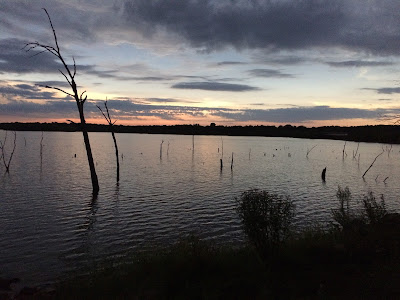 The views out on the lake during the eclipse were nice.

I am ashamed to admit it but it was actually a very cool experience. I am glad Carolynn made me go. 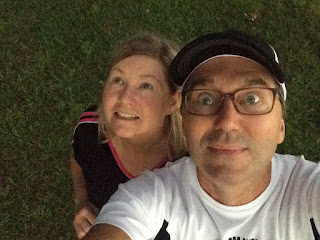 Posted by dirtdobber at 8:40 PM No comments:

That Bike will Kill You Son

It has been awhile since my last post.  I actually thought about not ever posting again but I recently thought that if I wrote about what has happened recently it would make me feel better.  So here we go.

The past few months have been very hard  on me - both physically and mentally.  I would say this period of my life is by far the hardest I have ever had for several reasons which I will go over during the next few weeks.  But first...

Back in April I foolishly decided to participate in an Hare Scrambles race and was involved in an accident out in Big Springs, KS.  I got hit from behind by a 250 lb motorcycle that was racing with me.  It happened so fast.  During the second lap I was moving up from a poor start (motorcycle did not start) and during one high speed section of the course my front end washed out around a corner and I clipped a tree.  This threw me into the trail where I was hit, hit very, very hard.  I actually thought for a few minutes that I was going to die right there in the woods.  Sure I like the woods and riding trails but I sure as hell did not want to die out in them on this day.

Once I stopped tumbling and crawled off the trail so no one else would hit me I tried to stand.  My body was having nothing to do with that.  Getting the breath knocked out of you is one of the worst feelings   For a couple of minutes I tried to ascertain my injuries and calm myself down.  Tom, the rider who crashed into me, and another rider tried to help me but they could not do much.  I started to panic because I could not breathe, but once we got my helmet off it was a little better.  My back and stomach were killing me and my hand was numb. 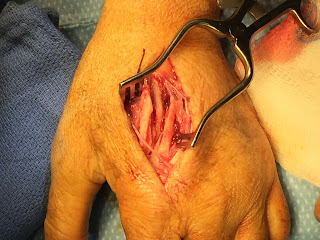 After about 5 minutes a trail patrol rider came by.  He did not know how long it would take for the paramedics to get to me.   By this time I could sort of breathe o.k. It was painful and I was making wheezing sound but at least I was breathing and walking.  I asked for help with picking up my bike and getting it started.  My ass was getting the hell out of those woods and off the course.   After some help I got going again.  It was very painful and I had to ride with one hand but I was able to make it out.

I knew I had some broken ribs and some internal injuries.  My hand was numb so I was unsure what damage had been done.  From past experience I knew that if we went to the hospital all that would happen is we would wait for several hours in an emergency room in Topeka only to drive home because they said I need to see a specialist.  Instead I decided to have Carolynn drive me home and go to my doctors in the morning.   Jason and Karry helped us load up.  I think someone else also helped but I was hurting so much I really do not remember. 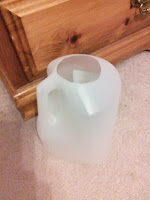 The evening was very painful.  I  could hardly breathe and I hurt all over.  The night went by very slowly.  Every time I moved  or coughed the pain just shot through my body.  I could not get out of bed to go to the bathroom so Carolynn had to make me a handmade bed pan.  For the next two weeks I used this handy jug when no one was home to help me get out of bed.

Morning finally came and Carolynn asked how I was doing and if I still wanted to go to the doctors.  I could not say "Yes" fast enough.  Only problem was I could not move.  My back had frozen up. When I tried to move severe pain shot down my spine and into my legs.  Images of my little brother John kept flashing in my mind.  What kind of damage had I done to myself?

We ended up having to get my son Christopher up out of bed.  I had not seen him in several weeks.  Not by choice, well at least not mine.  He has grown to hate me for some reason and has done everything in his power to avoid me.  I will not get into that right now.   Anyway, he grudgingly got up from his drunken stupor (he had just gotten home from parting all night) to help his old dad out.  I wish I had film of Carolynn and him trying to get me up out of bed.  Every time they moved me I would cry out in pain.  After about 10 minutes of trying, Carolynn said she was calling the ambulance.  I laid there for a few more minutes contemplating what to do.  Finally I decided I was going to get up at all cost.  Christopher took my left arm securely in his grip and Carolynn got behind me and and together they yanked me out of bed. Pain shot through my body like I have never felt and Christopher heard his Dad cry for the first time in his life.

"Ten".  That is what I told the nurse at the doctors office my pain level was.  I have been injured dozens of times and never have I responded with that number.  I guess getting hit by a motorcycle at high speed will do that to a persons body.   I ended up having a number of injuries:  fractured ribs and spine,  collapsed lung, damage to several internal organs and a destroyed left hand.

I keep thinking back to when I was 16.   I had just gotten my first real motocross bike - 1983 CR 250R.   After taking my first win at the Homestead Motocross - still the muddiest track I have ever ridden, I decided to head North to race in the Orlando stadium Supercross amateur day.   For the first time ever my dad came to watch me participate in a sport.  He never came to watch me or supported me when I played baseball, never saw me accept my Broward County Little League Player of the Year award.  But he did take a quick break from his Trucking Business (he had a shop in Orlando) to come watch me.  I won my heat race in the 250 B class.  Lined up for the Main event and proceeded to blast off the gate and into the first turn.  My front wheel washed out and about 5 riders ran over me when I hit the ground. After the race all I heard was "That Bike will Kill You Son".  My dad never again watched me race.  I kept racing but looking back I believe that man was right.
Posted by dirtdobber at 5:54 AM No comments:

Quote of the Day